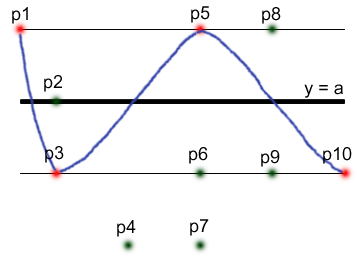 The task is simple. Through some critical points in 2D, you have to draw a wave like curve. Your goal is to include as many points as possible.


Two consecutive points on the curve should have a difference of 2 in their y coordinate.

For each test case print a number -- the maximum number of critical points that can be included in a curve drawn from the given points.