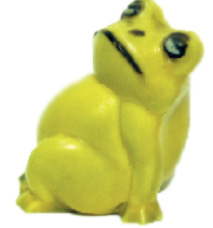 With the increased use of pesticides, the local streams and rivers have become so contaminated that it has become almost impossible for the aquatic animals to survive.

He can land on every small rock at most one time, but can use the bigger ones as many times as he likes. He can never touch the polluted water as it is extremely contaminated. Can you plan the itinerary so that the maximum distance of a single leap is minimized?

For every case, print the case number followed by the minimized maximum leap.