Probably everyone in this competition knows the Rubik’s Cube, a challenging 3-D puzzle. Each of it six sides is covered with nine labels, each label of a color (blue, yellow, orange, white, green and red). In its initial state, all nine labels on one face have the same color. One ingenious mechanism enables each face to be independently rotated, causing the colors of the labels on the sides to be mixed.

Each of the faces of the Rubik’s Cube is denoted by a letter: F, B, U, D, L, and R, as illustrated in the figure below. 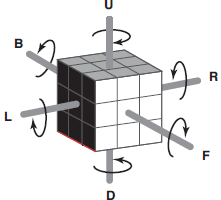 U F D R L B The rotation of a face is called a movement. We describe the movements using the letters that identify the faces:

You must write a program that, given a sequence of movements, determines the minimum number of complete applications of that sequence to make the cube return to its original state.

The input contains several test cases. Each test case is described in a single line, which contains the sequence of movements. Note: Each sequence has at least one and at most 80 characters.

For each test case your program must print a single line, containing a single integer, indicating the minimum number of complete applications of the given sequence to make the hub return to its original state.