The Gloud Computing is coming to Joinville's region. They're known for providing apps on the internet, more specifically a business model based on cloud computing.

In order to select the new employers of the company, they contacted UDESC marathon committee, so they could pass a problem to our marathoners. Those who solve it, beside de balloon, can fill a personnel file with more stars.

Basically, Gloud Computing has apps spread on their servers on several of places of the world. Those servers are specialized on a list of apps to be used by the users connected on the clouds.

We have a set of servers and each one comes with a set of applications to be provided to a set of users. Each user can be connected to one or more servers depending on its demand, as illustrated on the Figure 1. 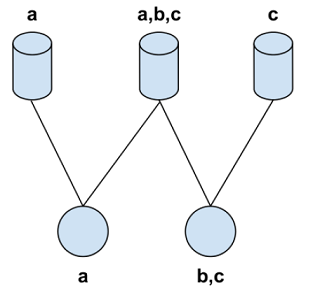 It will be given to you data about these two sets, servers and users' demand, and you should return the total amount of connections between clients and servers. The connections are made so that the redundancy is maximized. For instance, if a client wants to utilize the applications B and C, he will connect to all servers that provide at least the application B and all that provides at least C. Multiple connections between a pair of clients and servers count as only one. It can happen that a client requires an inexistent application, just like a server provide a non required application.